The electrifying Hip-Hop tag team L’Orange and Solemn Brigham are back with a brand new visual for “My People,” a standout cut from their album Marlowe 3, out now on Mello Music Group. The album reached #1 on Bandcamp and #2 on the UK iTunes Hip-Hop charts in addition to garnering critical support from Pitchfork, HipHopDX, Brooklyn Vegan, FLOOD and more.

“My People” is a daring, high-octane track that perfectly demonstrates Marlowe’s unique sound. Solemn Brigham raps with the unrivaled energy and charisma that he showcases in his live performances. Solemn says, “My People is definitely inspired by live performances this joint carries a boldness that I feel represents Marlowe well.” On the creation process for the “My People,” L’Orange adds, “We worked on this song forever. There were a lot of changes but we knew we had something and wanted to get it just right.”

Marlowe 3 is the third studio album from alt rap dyad, L’Orange and Solemn Brigham. The 18-track project features rap titans Joell Ortiz and Blu on the explosive posse cut Royal; fellow North Carolinan Deniro Farrar on Godfist, as well as a skit from British comedian Romesh Ranganathan in Romesh Says. Album highlights include the laidback introspective Light Trip and Jazz-infused lead single Past life. The track President the Rock was hailed by NPR as “a high-energy song that challenges the old guard, by taking the traditional and breathing fresh life into it.”

A testament to their tremendous growth, Marlowe 3 is the duo’s most focused release to-date and superlative completion to the Marlowe trilogy. L’Orange states, “This album feels like a maturity to who we are as a group. We set out to make something that was big, energetic, fun and explosive and I feel like we did that without losing control. I feel like Solemn and I are the best we’ve ever been.”

Solemn Brigham concludes, “I want to let all the people know that I feel a closeness to anyone who relates to our music and everyone that I shook hands with on tour or hit me online, thank you it’s definitely been a trip. Let’s keep it moving”

Marlowe 3 is out now- https://orcd.co/marlowe3 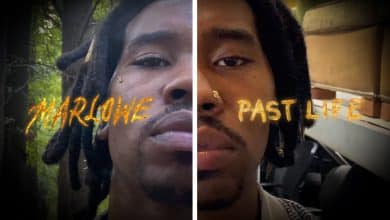