Multi-hyphenate artist Lady London serves opulence with the release of her eagerly-anticipated music video to “What Is It Giving” out now. The ear-perking single made its debut last week & bops between an infectious hook matched by London’s cut-throat punchlines. Today, “What Is It Giving” arrives with a larger-than-life visual to match and gives a new glimpse of what to expect from the rising artist.

Giving regal-realness dipped in her synonymous lady-like manner, the stylish visual offering from the New York-born, New Jersey-bred artist cinematizes the lyrical make of the Kosine-produced track. Lady London makes it known that regardless of the stage she steps on, her presence is known with lyrics that flaunt in ferocity. “When I give authentic, you give augmented; when I give couture, you give chaos, umm.. prolific, you give problematic, like what is it giving?” she playfully states.

This new release continues the rapid rise of Lady London, who’s built momentum with a string of singles, guest features, and revered freestyles over a few years. Her now highly acclaimed debut project Lady Like: The Boss Tape, arrived earlier this year and is comprised of thirteen of her most celebrated freestyle snippets that now stand in completion as complete tracks.

With “What Is It Giving” and more new music on the horizon, London continues to showcase the dimensional range of her artistry and ease with making anthems for the up-now moment. Her recently released single “Lisa’s Story,” featuring Dub Aura, derived from Lady Like: The Boss Tape, has become a social media phenomenon garnering over 1 + million engagements across social platforms. The track encapsulates a New York romance story that holds a glowing beam of nostalgia native to London’s roots. “What Is It Giving” is poised to deliver the same success as a summer anthem with its caption-worthy lyrics, potent delivery from London, and a music video that glistens in splendor.

Watch the music video for “What Is It Giving” above.

Words matter in conversation, online, and, of course, in hip-hop. Lady London strings together rhymes worthy of a social media caption, a street corner battle, or a festival stage. The New York-born, New Jersey-raised and Los Angeles-based rapper went from packing poetry shows as a teen and embarking on a pre-med path in college to rewriting her “10-year plan” and deciding to explore her artistry professionally in 2018 as a true outlier with hip-hop with an old school respect for wordplay and new school flare. After amassing millions of views and receiving the endorsement of Complex, Hot 97, Sway’s Universe, Cardi B, Diddy, Revolt, Genius, BET and more, she doubles down on a staunch commitment to verbal excellence on a series of 2020 and 2021 singles “Money Over” “Never”, her Lady Like: The Boss Tape project and more to come.

“There are multiple levels to me,” she explains. “I’m not one-dimensional. I really take my craft seriously. I consider rap to be an artform—not a trend. I’ve studied cadences, timing, breath control, double and triple entendres, and syllables. It almost breaks down to an exact science. I pay attention to verbiage, semantics, and diction. I’m a connoisseur of rhythmical composition in its purest form. I’m just a boss,” she grins.

January of 2022, acclaim for Lady London increased to a mainstream stance as she released her debut project Lady Like: The Boss Tape. One of the most discussed projects out right now, L.L.T.B.T. clusters together some of her most potent freestyles from her “Lady Londays” series which increased her social following to over half a million. As the project continues to reach new heights, it peaked Top 5 on the iTunes Rap/ Hip Hop charts as one of few indie-released projects to amass this significant achievement. L.A. Weekly stated, “Lady Like: The Boss Tape, just dropped, and it’s a tour de force of incisive hip-hop, with the rapper in full artistic control.” The success brought her an overdue co-sign from Billboard as “Artist to Watch for 2022,” while outlets such as UPROXX and Okay Player plugged the project as one of the best releases for the release week. “If you have been watching Lady London over the years, you know her craftsmanship is finally receiving the recognition she deserves,” Lyrical Lemonade shared. “London’s perspective is layered. She has a poet’s delivery and a battle rapper’s ferocity. No bar is wasted. Every word is intentional. Lady London is a star” Rolling Out voiced.

Ultimately, you’ll fall in love with Lady London too.

“When you listen to me, I want you to feel comfortable in yourself and empowered more than anything,” she leaves off. “We’re all the same. We all have things we battle, daily, but everyone excels at something. Therefore, every person is a boss in his or her own way. And you control the narrative around your own life. I want to be proof of that. Music is the closest thing to religion without the systemic element. It’s a spiritual encounter. It shifts our movements; it governs our temperament. And, if nothing more, I hope to transcend a generation with what I create and leave a legacy behind.” 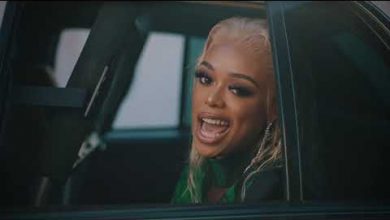